Since David Dolphin worked with both Alan Johnson (Nottingham) and Bob Woodward (Harvard) it is not surprising that the emphasis of his work relates to macrocyclic systems. Although trained as a synthetic organic chemist, he has combined research in organic, inorganic and biochemistry to both understand and mimic the life processes controlled by porphyrins, vitamin B12, and related macrocycles.

Dolphin's first major independent contribution was discovery of the facile and reversible oxidation of porphyrin and chlorin macrocyclic rings to generate "porphyrin" Π-cation free-radicals (19). The stability of these radicals suggested their occurrence in nature, and Dolphin and his colleagues showed that the primary photochemical process in photosynthesis is formation of a *-cation radical at reaction centres for both plant and bacterial photosynthesis (16,22).

Dolphin then sought for such *-cation radicals in hemes and hemeproteins and showed that the highest oxidation states of catalases and peroxidases are *-cation radicals of the type Fe(IV)Por+• (27), although of different electronic ground states (37-39). Indeed, this formulation and its extension to oxoferryl species is the basis for understanding all hemeproteins that activate dioxygen or peroxides, including catalases, peroxidases, ligninases, haloperoxidases and cytochromes P-450 (47).

Dolphin has made major contributions to our understanding of P-450's; he showed that thiolate is bound to the ferrous CO complex, which gives rise to the characteristic optical spectra, and that thiolate remains bound upon dioxygen binding (66,76,81,118); model studies further clarified the nature of the peroxide complex before O-O bond cleavage (145).

Research in the P-450 area has been stimulated by Dolphin's synthesis of highly chlorinated tetraphenylporphyrin systems (244,328), which both mimic the enzymatic oxidation chemistry and sustain large catalytic turnovers (171) due to the steric stabilization and electronic activation by the halogens (328). Dolphin's group has shown also that these catalysts mimic ligninases (246,265) and these are now recognized for their excellent biomimicry and industrial potential (240,245,328, 352, 355). The highly chlorinated catalysts can sustain high turnovers and this has allowed Dolphin to use them to mimic the suicide inactivation and N-alkylation of hemes in P-450 (255). This work originated with Dolphin's observation that intramolecular electron transport can occur between the metal and macrocycle, e.g. Ni(III)Por*Ni(II)Por+• (64), followed by the demonstration of reversible migration of alkyl and aryl groups between the metal and porphyrin nitrogens, e.g. R-Co(III)-N*Co(II)-N-R (152). N-Alkylation of P-450 is known to occur when terminal alkenes are being metabolized, and Dolphin has demonstrated the same N-alkylation of halogenated hemins during alkene epoxidation (255). Thus, these heme catalysts mimic all three principal reactions occurring with P-450: epoxidation, alkane hydroxylation and N-alkylation. Both *-iron alkyl and porphyrin N-alkyl complexes play important roles in the inactivation of P-450's during their normal metabolic functioning (204). *-hydroxy¬alkyl *-iron porphyrins were shown to generate epoxides (230), further extending the mechanisms of P-450 inactivation.

The high catalytic activity of the electronegative hemins was used to examine epoxidation of norbornene where, in addition to the reported exo epoxide product, both endo epoxide and rearranged products were found, suggesting that electron transfer followed by carbon-oxygen bond formation generates a cationic intermediate (Fe(III)-O-C-C+); this accounted for all reactions observed with P-450 and alkenes, namely epoxidation, rearrangement (1,2-shifts) and N-alkylation (199).

In addition to inactivation of P-450 by reaction at N or Fe, alkylation at the porphyrin periphery has been observed. Dolphin showed in 1970 that upon oxidation, metalloporphyrins reacted with nucleophiles to give isoporphyrins (18), which can also be generated from metalloporphyrin -cation radicals (110).

A move to the porphyrin chemistry of Ru, the 2nd row analogue of Fe, has also unearthed some very significant findings, this work being a collaborative effort with James, a colleague at UBC. These findings include: syntheses of Ru-myoglobins (116), binding and activation of O2 and O-atom donors (100,164,232), formation of N2 complexes (196,223), catalytic decarbonylation of aldehydes (135,151,207), establishment of porphyrin cation-radicals and electron transfer with Ru porphyrins (149,165,178), and some unique organometallic chemistry including measurement of Ru-C bond strengths (198,212,254,259).

Dolphin's synthetic expertise has allowed him to generate novel compounds to address the central focus of his research - biomimetic chemistry. In 1972, he prepared the first covalently linked dimeric porphyrins and examined energy transfer between the porphyrin rings (36), and this was followed by elegant synthetic strategies that generated dimeric porphyrins linked only by a hydrocarbon chain (99), cofacial dimers (166), and porphyrins strapped by a single hydrocarbon chain to enforce severe distortion of the porphyrin (219). The strategy was also used to generate capped porphyrins with hydrophobic caps of varying size which have been used to explore the role of distal effects on CO and O2 binding to hemes (192,193,197,202,209,214,326).

The first synthesis of an N-confused porphyrin shows his continued interest in synthetic porphyrin chemistry (321). As does his elegant syntheses of the new classes of chlorophyll antioxidants (315,353) and his other studies in related areas (295,301,330). An achievement with Woodward in 1967, though not published till much later (167), was the rational synthesis of sapphyrin. The interest in "expanded" and "polypyrrolic" macrocycles has since blossomed (332,340) and Dolphin added to this field recently with a simple but elegant synthesis of porphocyanine (271,317,339) and an authoritative review of the subject (336).

A new area of interest amongst organic chemists is that of supramolecular chemistry. Such research involves the self assembly of small molecules into supramolecular assemblies in order to mimic and understand these processes which nature uses to construct the building blocks of life. Dolphin has recently made original contributions in this area using polypyrrolic ligands and metal ions to form helical and other unusual shaped molecular complexes (351,356). This work is based upon Dolphin’s studies with polypyrrolic ligands (345,346,348,354).

His interest in the fundamental chemistry of porphyrins led to the discovery of "diene-like" properties of vinylporphyrins which can undergo Diels Alder reactions with dienophiles (128,195). While these novel reactions add to our understanding of the electronic structure and reactivity of porphyrins, Dolphin identified the reaction products as unique anti-cancer drugs for use in photodynamic therapy (239). Under the auspicies of an NSERC Industrial Research Chair and with QLT Phototherapeutics, where he is V.P. Technology Development, a drug (developed in collaboration with Levy) is in human clinical trials and is effective against cancer, psoriasis, age related macular degeneration (218,241,262,266,267) and other proliferate diseases and he is now recognized as the leading international chemist in the area of photodynamic therapy (273,316,341).

Publication of "The Porphyrins" in seven volumes in 1978/79 (108), edited by Dolphin, has helped spur the tremendous interest in these systems, and the two edited books on "B12" (157) are still the principal reference source in this area where Dolphin has also made significant contributions (72) which are summarized in a review published with Abeles (68).

A recent piece of work (350) may revolutionize the way in which the pharmaceutical industry determines drug metabolism since Dolphin has developed a catalyst which appears to mimic mammalian livers in the way in which it generates drug metabolites. Not only might this simplify metabolic studies but it should dramatically decrease the number of animals needed for such studies.

Although it is always difficult to judge the full impact of an individual's research, Dolphin's studies on porphyrin *-cation radicals clearly set the stage for a vast body of research carried out on hemeproteins and their model systems, and that since that time he has made numerous pivotal studies in these areas and has initiated research areas that many others are now following.

His work on photodynamic therapy and its application to human disease is unique and has been pivotal in making QLT North America’s fifteenth largest biotech company with a capitalization of >$1.5 Billion. 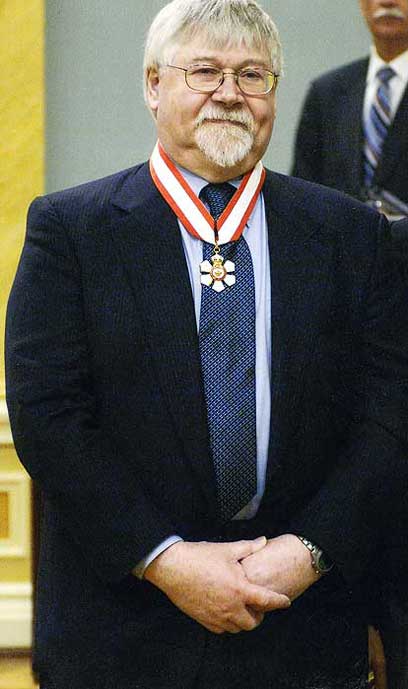 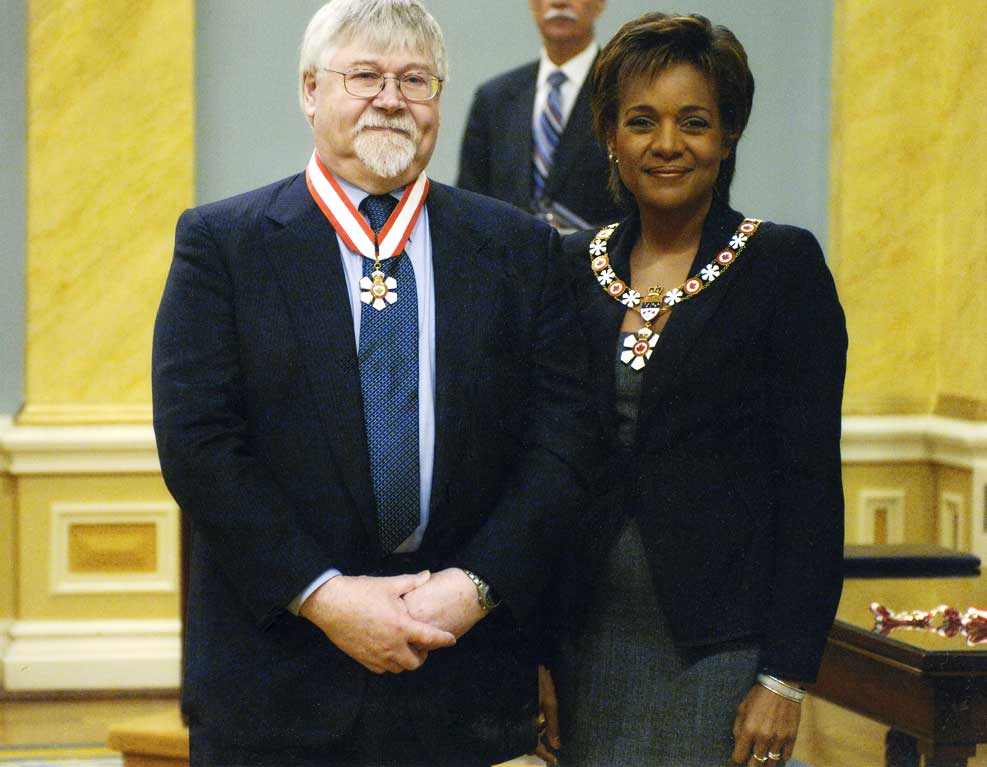 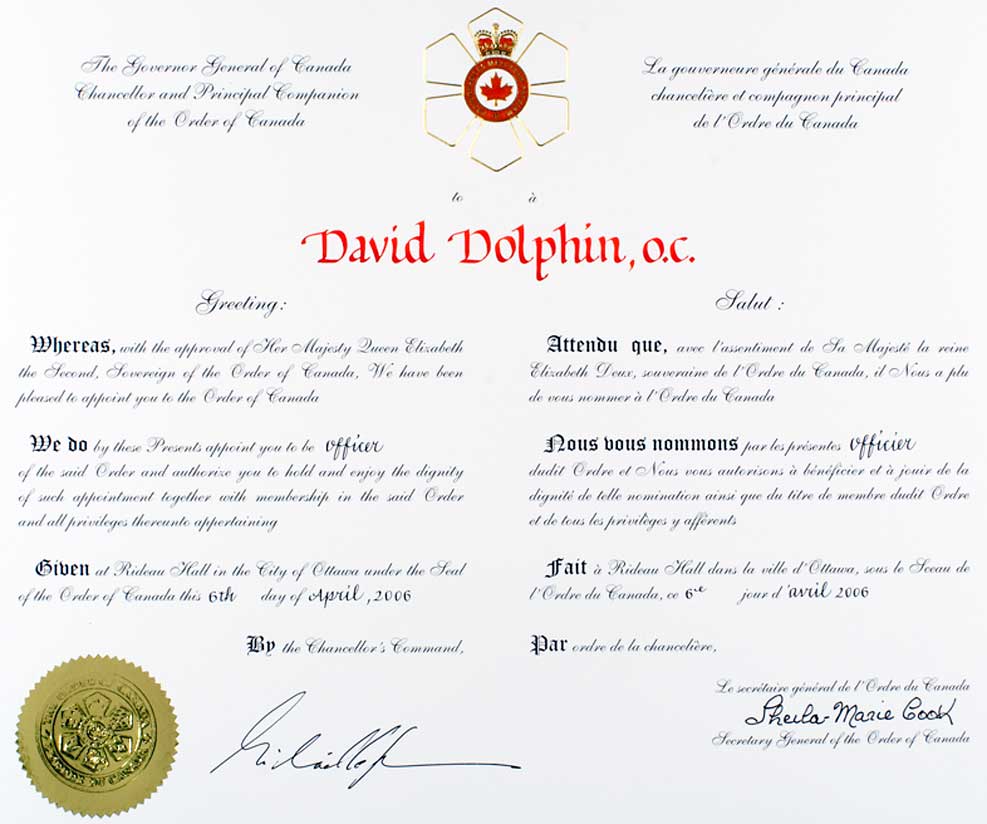